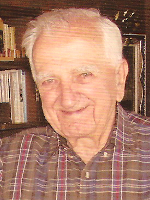 AMSTERDAM – August Conrad Tiemann, 89, of Amsterdam, NY, passed away on Sunday, March 4, 2018, with his family by his side at Albany Medical Center after a short illness with cancer.  He was born in the Town of St. Albans, Franklin County, Vermont, and served in the U.S. Army Air Corps and the U.S. Air Force at the Griffiss Air Force Base in Rome, NY from World War II until the Vietnam War.  He was also employed at the Mohawk Carpet Mills, and worked as a sheet rocker for Van Patten Construction.  After retiring, he took on side jobs providing lawn service.  August was also a volunteer firefighter with the Cranesville Fire Department, and enjoyed traveling the world and being with his family.

A Memorial Mass celebrating his life will be held at St. Stephen’s Church, 51 N Pawling St, Hagaman, NY, at 11 am on Thursday March 8th.  In lieu of flowers contributions can be made to St. Jude Children’s Research Hospital, 501 St Jude Place, Memphis, TN 38105; or to the Cranesville Fire Department, 167 Riverview Dr, Amsterdam, NY 12010.  To leave a message of condolence for the family, please visit www.HansFuneralHome.com.

Offer Condolence for the family of August C. Tiemann

A Certified Celebrant is a person who is trained and certified to meet the needs of families during their time of loss.  A Celebrant serves by providing a funeral service that is ...  END_OF_DOCUMENT_TOKEN_TO_BE_REPLACED