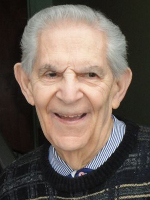 ALBANY – Anthony T. Mirabile, 88, passed away on April 29, 2011 with his loving wife Mary, of 68 years, by his side.  Tony was born in Albany on January 11, 1923, the son of Patsy and Domenica Mirabile.  He graduated from Philip Schuyler High School where he began his training for a career in the printing industry.  He worked for several years at Schatz Stationery, Maqua Printing and Fort Orange Press.  Tony also served in the US Coast Guard during World War II.  His family, faith and friends were the center of his life.  He also enjoyed gardening and the regular breakfast gatherings with his friends during his retirement years.  He was most proud of his marriage to his loving wife, Mary, with whom he would have celebrated his 68th Anniversary this week.

In addition to his wife, Tony is survived by his nephews Michael Hickey (Elaine), Mark Hickey (Sandra), and his nieces Mary Pat Hickey and Maureen Bliven (Michael).  He is also survived by his great nephews, Stephen and Christian Bliven and Brian and Greg Hickey.  He was predeceased by his parents, his brother Santo Mirabile, and his sister Carmela Hickey.

Funeral services will be held in the Hans Funeral Home, 1088 Western Ave., Albany, Tuesday morning at 9:00, and from there to Christ Our Light Catholic Church (formerly St. Francis DeSales Church), 1 Maria Drive, Loudonville at 10:00.  Relatives and friends are invited, and may call at the funeral home Monday from 5-7 p.m.  Interment will be in Our Lady of Angels Cemetery, Colonie.  To leave a message of condolence for the family, send a sympathy card, or obtain directions to the funeral home, please visit www.HansFuneralHome.com.

Offer Condolence for the family of Anthony T. Mirabile

A Certified Celebrant is a person who is trained and certified to meet the needs of families during their time of loss.  A Celebrant serves by providing a funeral service that is ...  END_OF_DOCUMENT_TOKEN_TO_BE_REPLACED