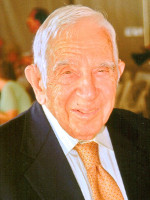 ALBANY – Anthony M. Salerno, 98, of Albany, passed away on Friday, June 16, 2017.  Anthony was born in Clyde, NY, and served in the U.S. Army Air Force during World War II.  He was awarded the Victory Medal, Good Conduct Medal and the American Theater Ribbon.  He was a graduate of the Sage College Evening Division with a BS in Business Administration, and was the president and owner of the Glenn Davis Co. in Schenectady.

He also was awarded many special honors:  From the Schenectady County Chamber of Commerce – The 1980 “Member of the Year,” and 1981 and 1982 “Bob Leonard” Awards, and the 1983 Scanecta-De-Award; From the United Way of Schenectady County the 1985 “Saul King Award” for Volunteerism, the 1987 “Volunteer of the Year Award,” which in 1989 was renamed the “Anthony M. Salerno Volunteer of the Year Award” by Mayor Karen Johnson;  from the Schenectady County Council of the Boy Scouts of America the 1986 “Distinguished Citizen Award,”  the Schenectady YMCA 1987 “Dr. Norman D. Kathan Community Service Award,”  the Rotary District 719 1986 “Citizen of the Year Award,” the Albany Airport Rotary Club 1989 “Distinguished Service Award,” the Schenectady Board of Realtors 1989 “Distinguished Service Award,” the Hudson-Mohawk Chapter of the National Society of Fund Raising Executives 1989 “Lifetime Achievement Award,”  he was appointed Special Assistant to the President of the College of St. Rose in 1993, the 1994 Recipient of the Center for Family & Youth Annual Award, the Clowns on Rounds 1996 “Man of the Year” award, the 2006 Little Sisters of the Poor “Garden of Hope Award,” and the Teresian House 2012 “Lifetime Achievement Award.”

A Mass of Christian Burial will be celebrated Tuesday morning at 10:30 a.m. in The Parish of Mater Christi, Hurst Ave. & Hopewell St., Albany.  Relatives and friends are invited, and may call at the church Tuesday morning beginning at 9:30 am.  Interment will be in Calvary Cemetery, Glenmont.  Arrangements have been entrusted to the Hans Funeral Home, Albany.  To leave a message of condolence for the family, please visit www.HansFuneralHome.com.

Offer Condolence for the family of Anthony M. Salerno, Sr.

A Certified Celebrant is a person who is trained and certified to meet the needs of families during their time of loss.  A Celebrant serves by providing a funeral service that is ...  END_OF_DOCUMENT_TOKEN_TO_BE_REPLACED