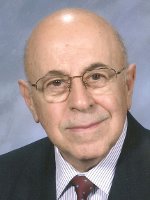 ALBANY – Anthony J. Mirabile, 88, of Albany, passed away unexpectedly Thursday, July 2, 2015 at Albany Medical Center.  Tony, a lifelong resident of Albany, was born in Glens Falls in the summer of 1926, the son of the late Joseph and Santa (DePasquale) Mirabile.  He graduated in 1944 from Vincentian Institute and attended Siena College, Albany Business College and Navy Communications School.  He served in the U.S. Navy in the Pacific Theatre during World War II.  He was employed by the Veterans Administration until entering the business of Lake Electronic Service in 1954 as co-owner, serving as President from 1973 until his retirement in 1994.  Tony was also a communicant of All Saints Catholic Church (the former St. Margaret Mary’s) and a member of the Parish Seniors.  He was also an active member and Past President of the Italian American Community Center, a member of the American Italian Heritage Foundation, a board member of the Albany Columbus Day Parade Committee, a 4th degree member of the Knights of Columbus and Past Grand Knight of the Colonie Council 3394. Tony was an avid fan of both the Yankees and Giants.  He enjoyed bocce at the Club, bowling, big band music, dancing, Saturday night dinner with Andy and Joe, lunch with the “Birthday Boys,” a good drink, a good cigar, a good joke, and most of all, getting together with his loving family and friends.

Tony was predeceased by his wife Helen M. (Triolo) Mirabile in 2010.  He is survived by his children Andrew Mirabile, Joanne DiFrancesco (Robert), Julie Miller (Louis), and Joseph Mirabile; his grandchildren Jennifer Biski (Joseph), Gregory and Nicholas Miller, and Nicole and Sarah DiFrancesco; his great-grandchildren, Hunter and Isabella Biski;  his sisters-in-law Sarina Nagi and Cecilia Rigosu (Vincent); his-brother-in law Joseph Triolo and by many nieces, nephews and friends.  In addition to his parents, he was predeceased by his brother Dominick S. Mirabile, his brother-in-law Vincent Triolo and his sister-in-law Vera Rappazzo.

Funeral services will be held in the Hans Funeral Home, 1088 Western Ave., Albany, Monday morning at 8:15 a.m., and from there to All Saints Catholic Church, 16 Homestead St. (behind CVS), Albany at 9:00 a.m.  Relatives and friends are invited, and may call at the funeral home Sunday from 4-8 p.m.  Interment will be in St. Agnes Cemetery, Menands.  In lieu of flowers, the family requests donations in Tony’s memory to All Saints Catholic Church, 12 Rosemont St, Albany, NY 12203; or to St. Jude Childrens Research Hospital, 501 St. Jude Place, Memphis, TN 38105-1942.  To leave a message of condolence for the family or obtain directions to the funeral home please visit www.HansFuneralHome.com.

Offer Condolence for the family of Anthony J. Mirabile

A Certified Celebrant is a person who is trained and certified to meet the needs of families during their time of loss.  A Celebrant serves by providing a funeral service that is ...  END_OF_DOCUMENT_TOKEN_TO_BE_REPLACED