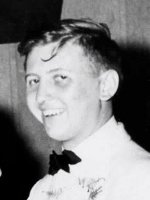 ALBANY – Anthony J. Harden, born on April 22, 1927 in Canajoharie, NY of Everett and Mary Julia Harden, died on Thursday, December 24, 2015 at the Teresian House in Albany.  During World War II, Mr. Harden served in the U.S. Army’s 42nd Infantry “Rainbow” Division, and he was part of the group that liberated the concentration camp at Dachau.  He was awarded the Silver Star and two Bronze Stars for his actions during the war.  He was employed for many years by Cotrell & Leonard of Albany, and served there as general manager.  He also was the president of the Intercollegiate Bureau of Academic Costume. He was a member of the VFW and the American Legion.  He adored his wife and was devoted to his family, and until recently enjoyed smoking cigars daily since the age of 14.

Anthony was predeceased by his wife of 66 years, Marie J. Harden, and also by his daughter Patricia Harden.  He is survived by his sons Joseph (Susan), Philip (Mary), and John (Rob); his grandsons Matthew [Maegan], Peter [Heather], Philip [Manpreet], Paul [Cassi], Lewis [Lia], Dejioun “D.J.”, and Sein; his granddaughter Alikaisha; and by twelve great grandchildren.  He was also predeceased by his brother Joseph J. Harden, who was killed in the explosion of the USS Mt. Hood during World War II.

A Mass of Christian Burial will be celebrated Wednesday morning at 9:30 am in the Parish of Mater Christi, Hurst Ave., Albany.  Relatives and friends are invited, and may call at the Hans Funeral Home, 1088 Western Ave., Albany on Tuesday from 4-7 pm.  Interment will be in St. Johnsville Cemetery.  The family suggests memorial contributions to The Writing Partnership, which is a charity dedicated to working with refugees and victims of genocide, at 156 Colonial Ave., Albany, NY 12208 or at www.writingpartnership.org .  To leave a message of condolence for the family or obtain directions to the funeral home, please visit www.HansFuneralHome.com.

Offer Condolence for the family of Anthony J. Harden

A Certified Celebrant is a person who is trained and certified to meet the needs of families during their time of loss.  A Celebrant serves by providing a funeral service that is ...  END_OF_DOCUMENT_TOKEN_TO_BE_REPLACED