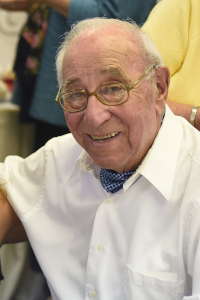 ALBANY – Dr. Anthony Francis “Tony” Mastrianni, a man of integrity and compassion, born August 27, 1929, in Mechanicville, N.Y. to Anthony and Carmella Mastrianni. Tony passed away at home with his wife and family by his side, early Tuesday morning, December 22, 2020 at 91 years of age. He graduated with a B.S. from Union College, Schenectady N.Y. in 1950 and received his Doctor of Medicine degree from McGill University, Montreal in 1954.

In 1956, Tony married the love of his life and wife of 64 years, Joan M. Gallagher, a native of Pittsfield, MA. Together, they raised six devoted daughters. Tony will be lovingly remembered by Joan and her family, Elizabeth Mastrianni and Frank Ralbovsky, Mary Jean and Michael Ciechoski, Kathleen and Daniel Powers, Marguerite and Robert Fuller, Patricia and Dale Desnoyers, and Christine Mastrianni Fay. He will also be affectionally remembered by his thirteen grandchildren and their families, Katy and Tom Perry, Jennifer, Nick and great grandson Vincent Petrick, Justin Ciechoski, Carolyn Powers and Sam Gilford, Anthony and Colleen Powers, Christina Fuller, Zachary and Connor McMahon, and Bryan, Emmett and Regina Fay. Tony was predeceased by his brothers, Michael and Xavier.

Prior to starting his career as a pediatrician in the early 1960’s, Tony was a physician and radiologist in the U.S. Air Force in Washington. He completed his residency at Albany Medical Center and thereafter opened his pediatric practice on New Scotland Avenue, Albany. In 1966 he moved his practice to Western Avenue; in 1977, Tony started Schoolhouse Road Pediatrics, which continues to thrive to this day. Joan worked as a nurse before their daughters’ births and later joined Tony as a receptionist in her husband’s practice. In addition to private practice, he was the Medical Director for St. Margaret’s Center in Albany for 25 years where he cared for severely ill children. He also served as the Chief of Pediatrics at St. Peter’s Hospital in Albany. He dedicated his life to the protection and care of children and supported generations of local families.  Dr. Tony practiced medicine for over 50 years, retired in 2005, and continued to diagnose, counsel and treat family and friends until the day he died.

Tony and Joan enjoyed their retirement in Fort Meyers, FL in winters and in Guilderland and Spring Lake, N.Y. in the summers. He was an avid golfer and proudly displayed two “hole in one” plaques in his living room. Tony was a Board Member at the Albany Country Club where he and Joan enjoyed many years of golf and gatherings with close friends; later, they were a vital part of the Olde Hickory Golf and Country Club community in Fort Meyers.  He was a founding member of Spring Lake Corporation. Tony was a lover of travel (especially to Italy) and the keeper of family traditions such as ravioli making at Easter and Christmas Eve fish dinners. Gatherings at Spring Lake with family and friends were especially cherished. He was a devout catholic and longtime parishioner at Christ the King Church. Tony had a strong moral compass, spoke his mind and was an engaged conversationalist. He was always sharply-dressed and enjoyed sports, skiing, sailing, politics, cooking, wine, butter pecan ice cream, crossword puzzles, opera, and literature.  Above all, Tony was a loving husband to Joan, a wonderful father, grandfather, great grandfather and friend to all. We are blessed to have had him in our lives. La Dolce Vita!

A private funeral mass to celebrate Tony’s life will be held for the family at Christ the King Church in Guilderland, N.Y. on Monday, December 28, 2020 at 11am, due to Covid-19.  For those who would like to virtually attend, the service will be streamed live at www.ctkparishny.org. In lieu of flowers, contributions can be made to the Guilderland Food Pantry, 4 Charles Blvd., Guilderland N.Y. 12084 and St. Margaret’s Center, 27 Hackett Blvd., Albany N.Y. 12208.  If you would like to write a message, share a memory, picture and video with Joan and the family, please email mastriannifamily7@gmail.com.

Offer Condolence for the family of Anthony F. Mastrianni, M.D.

A Certified Celebrant is a person who is trained and certified to meet the needs of families during their time of loss.  A Celebrant serves by providing a funeral service that is ...  END_OF_DOCUMENT_TOKEN_TO_BE_REPLACED