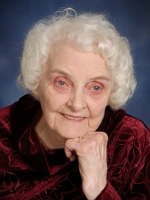 GUILDERLAND – Anna Comstock Garrison, 95, passed away peacefully on Thursday, June 9, 2016 at Good Samaritan Nursing Home, Delmar.  Anna was born on September 22, 1920, to the late Ralph E. Comstock and Marietta Keenholts Comstock.  She grew up in Menands and Albany, graduating from Albany High School.  On August 22, 1941, she married the love of her life, Thomas W.C. Garrison of New Salem.  During WWII, while Tom was stationed in Georgia, Anna moved there to be near him.  Following the war, they returned home to Albany, and settled in the hamlet of McKownville in the Town of Guilderland.  Anna worked for the Albany News Co. and Niagara Mohawk until she and Tom adopted their beloved daughter, Gail.  While caring for her family, Anna was involved with the McKownville Fire Department Ladies’ Auxiliary, and she was also a Girl Scout and 4-H Troop Leader.  She eventually returned to working outside the home, and retired from the NYS School Boards Association, in her position of bookkeeper, in 1982.  In their leisure time, Anna and Tom enjoyed bowling with friends from the McKownville Fire Department, traveling, and square dancing, for which Anna sewed both Tom’s and her costumes.   Following Tom’s sudden passing in October of 1983, Anna learned the art of quilting and made many beautiful quilts until losing her sight to macular degeneration.  She was a member of McKownville United Methodist Church, enjoying many long-term friendships begun there.

In addition to her parents and husband, Anna was predeceased by her brother Ralph E. Comstock, Jr., his wife Louise (Herber) and their daughter Judith, and her twin brother Donald Comstock and his wife Jessie (Dober).   She is survived by her loving daughter, Gail, as well as nieces Barbara Ann Comstock Morgan (William) of Castleton and Donna Mae Comstock (William Sigalos) of Falls Church, VA, and nephew Ralph Comstock of VA.  Anna is also survived by Barbara and Bill Morgan’s children, especially her beloved grandniece, Teresa (Frank Thierbecker III) and their children, Frank IV and Morgan.

Sincere appreciation is expressed to Dr. Gary Bakst and nurse, Nancy Kaiser of The Endocrine Group for their many years of compassionate care of Anna.  The family also wishes to thank Good Samaritan for their care and compassion.

A visitation will be held Thursday, June 16, 2016, from 4 – 7 p.m. with a funeral service immediately following at Hans Funeral Home, 1088 Western Avenue, Albany.  Interment will be private at the family’s convenience.  In lieu of flowers, donations in Anna’s memory may be made to McKownville United Methodist Church, McKownville Volunteer Fire Department, or NABA (National Association for the Blind of Albany).  To leave a message of condolence for the family or obtain directions to the funeral home, please visit www.HansFuneralHome.com.

Offer Condolence for the family of Anna Comstock Garrison

A Certified Celebrant is a person who is trained and certified to meet the needs of families during their time of loss.  A Celebrant serves by providing a funeral service that is ...  END_OF_DOCUMENT_TOKEN_TO_BE_REPLACED