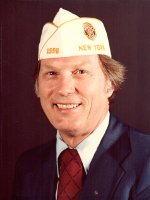 ALBANY – Alton H. “Al” Carpenter, 87, passed away peacefully on Saturday, May 2, 2015. Al was born on January 29, 1928 on his grandfather’s farm in Kelsey, NY, the son of Adelbert Daniel Carpenter and Ethel LaVonne (Peckham) Carpenter. He spent all of his youth on his parents’ dairy farm in Harpursville, NY until he graduated from high school and joined the Service. He proudly served his country at the end of WWII and again during the Korean Conflict and was honorably discharged from the U.S. Army Air Corps, and the U.S. Air Force. After discharge from the Air Force, he worked for over 30 years at Bendix Corporation in Sidney NY as a Systems Analyst and returned to live for many years in his hometown of Harpursville NY and raise his family. After retiring from Bendix at age 55, he moved to Albany NY and began working, first as a consultant, then full time as the Administrative Office Assistant to the Adjutant for the NYS American Legion Headquarters in Albany, N.Y. He was a Lifetime Member of the American Legion Post 1596 in Harpursville, NY serving as Post Commander, NYS Department Commander and National Historian. He was always a dedicated advocate for veterans and their families, lobbying in both New York State and Washington DC for veterans services and benefits—and was at a meeting in Washington DC on September 11, 2001, meeting with members of Congress on behalf of Veterans. He was a longtime member of the Albany Redmen Bowling League and as team captain, led his team to first place in the 2014-15 season. He was an avid Outdoorsman who loved hunting and fishing, a proficient horseshoe player, but mostly just loved being outdoors.

Al and his family would like to express their deepest appreciation for the doctors, nurses and staff at the Stratton VA Hospital for their compassion and expert medical care he received over the years, including dialysis, cardiology and the ICU in the later stages of his care.

Funeral services will be held in the Hans Funeral Home, 1088 Western Ave., Albany, Wednesday evening at 7:00 pm. Relatives and friends are invited, and may call at the funeral home Wednesday from 4-7 pm. Inurnment in the Gerald B.H. Solomon Saratoga National Cemetery in Schuylerville, NY, will be held Friday, May 8th, at 10:00 am. In lieu of flowers donations may be made to DAV, the Disabled American Veterans, Payable to DAV — Disabled American Veterans, P.O. Box 14301, Cincinnati, OH  45250-0301  or call  877-647-VETS.  To leave a message of condolence for the family or obtain directions to the funeral home, please visit www.HansFuneralHome.com .

Offer Condolence for the family of Alton H. Carpenter

A Certified Celebrant is a person who is trained and certified to meet the needs of families during their time of loss.  A Celebrant serves by providing a funeral service that is ...  END_OF_DOCUMENT_TOKEN_TO_BE_REPLACED