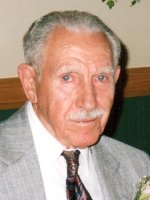 ALBANY – Alfred V. Testa, 96, of Albany, died Saturday, January 26, 2013, at his home.  Mr. Testa was born in Albany, the son of the late Rosario and Maria Casella Testa.  He lived here all his life.  He served in the U.S. Navy during World War II from 1943 to 1945, including service aboard the destroyer USS Ingraham (DD-694), and during the major campaigns in the Pacific, for which he was presented several awards.  He was employed for many years by the Horton Heating Co. in Albany, and later by the State University at Albany until his retirement.  He was a communicant for many years of the former St. Margaret Mary’s Church in Albany, and was a member of the American Legion.  He also was an avid gardener, tending a garden of nearly a half acre until very late in life.

Mr. Testa was predeceased by his beloved wife of 70 years, Concetta M. Ravida Testa, in 2010.  He is survived by his sons Rosario “Ross” Testa (Donna) of Slingerlands, Anthony Testa (Connie) of No. Easton, MA, and Alfred D. Testa (Sue) of Albany; his brother Ferdinand Testa (Mary) of Rochester; his grandchildren Michael Testa, Allison McHugh (Kevin), Stephanie Ballard (Jeff), Alfred V. Testa (Meghan), and Andrea Hallock (Peter); his great grandson Tyler Domings; and by several nieces and nephews.  He was predeceased by his brothers Nick and William Testa, and by his sister Josephine Greco.

Funeral services will be held in the Hans Funeral Home, 1088 Western Ave., Albany, Friday morning at 8:15, and from there to All Saints Catholic Church (the former St. Margaret Mary’s Church) at 9:00.  Relatives and friends are invited, and may call at the funeral home Thursday from 4-8 p.m.  Interment will be in Our Lady of Angels Cemetery, Colonie.  Those who wish may make memorial contributions to Community Hospice of Albany, 445 New Karner Rd., Albany, NY 12205.  To leave a message of condolence for the family, or obtain directions to the funeral home, please visit www.HansFuneralHome.com .

Offer Condolence for the family of Alfred V. Testa

A Certified Celebrant is a person who is trained and certified to meet the needs of families during their time of loss.  A Celebrant serves by providing a funeral service that is ...  END_OF_DOCUMENT_TOKEN_TO_BE_REPLACED