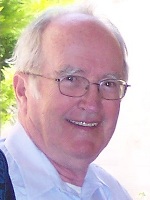 ALBANY – Alexander P. McDonnell, 79, of Albany died on Monday, September 27, 2010 at Albany Medical Center, surrounded by his family. He was born in New Rochelle on June 17, 1931, a son of Alexander and Anne Heffernan McDonnell and attended Regis High School. In the 1950’s, he served in the United States Air Force as an OSI officer and was stationed in French Morocco. As a graduate of George Washington University, he earned a B.A. in History.

He enjoyed a 45-year career in the computer field as a systems specialist primarily at Unisys.  Although much of his computer work on government contracts remains classified, in the 1970’s he created systems integrating DMV records across states and a system for the Colorado State Police which enhanced patrol safety. For the past ten years, he was employed by the New York State Insurance Fund.

A devout Catholic, he was a charter member of the Knights of Columbus of Holy Family in Silver Spring, Maryland and served as a lector and trustee for many years at Holy Cross Church and then at All Saints Catholic Church in Albany. Alex enjoyed singing, traveling, giving tours of Washington, D.C. and gardening.  Golf was his favorite pastime.  At a young age, he caddied with his brothers and spent many happy hours on the links, most recently with the Knights of Columbus Golf League.  He was involved with the New York State Golf Association as a Liaison.

The family will receive friends at Hans Funeral Home, 1088 Western Ave, Albany, New York 12203 on Friday, October 1 from 4 to 7 P.M. A Memorial Mass of Christian Burial will be offered on Saturday at 9:30 A.M. at All Saints Catholic Church, 1168 Western Avenue. Inurnment at St. Agnes Cemetery in Menands. Memorial contributions may be made to Catholic Charities, 40 North Main Avenue, Albany New York 12203. The family is grateful to the staff at Albany Medical Center, especially on D4 East, and to the physicians at NYOH for their compassionate care.To leave a message of condolence for the family or obtain directions to the funeral home, please visit www.HansFuneralHome.com.

Offer Condolence for the family of Alex McDonnell

A Certified Celebrant is a person who is trained and certified to meet the needs of families during their time of loss.  A Celebrant serves by providing a funeral service that is ...  END_OF_DOCUMENT_TOKEN_TO_BE_REPLACED